THE LATEST EDITION OF AN ICON: WORLD PREMIERE OF THE DIGITALISED MULTIVAN 6.1

Hannover, 21 February 2019 – It is the icon of commercial vehicles: the Bulli. Transporter, Caravelle, Multivan and California. 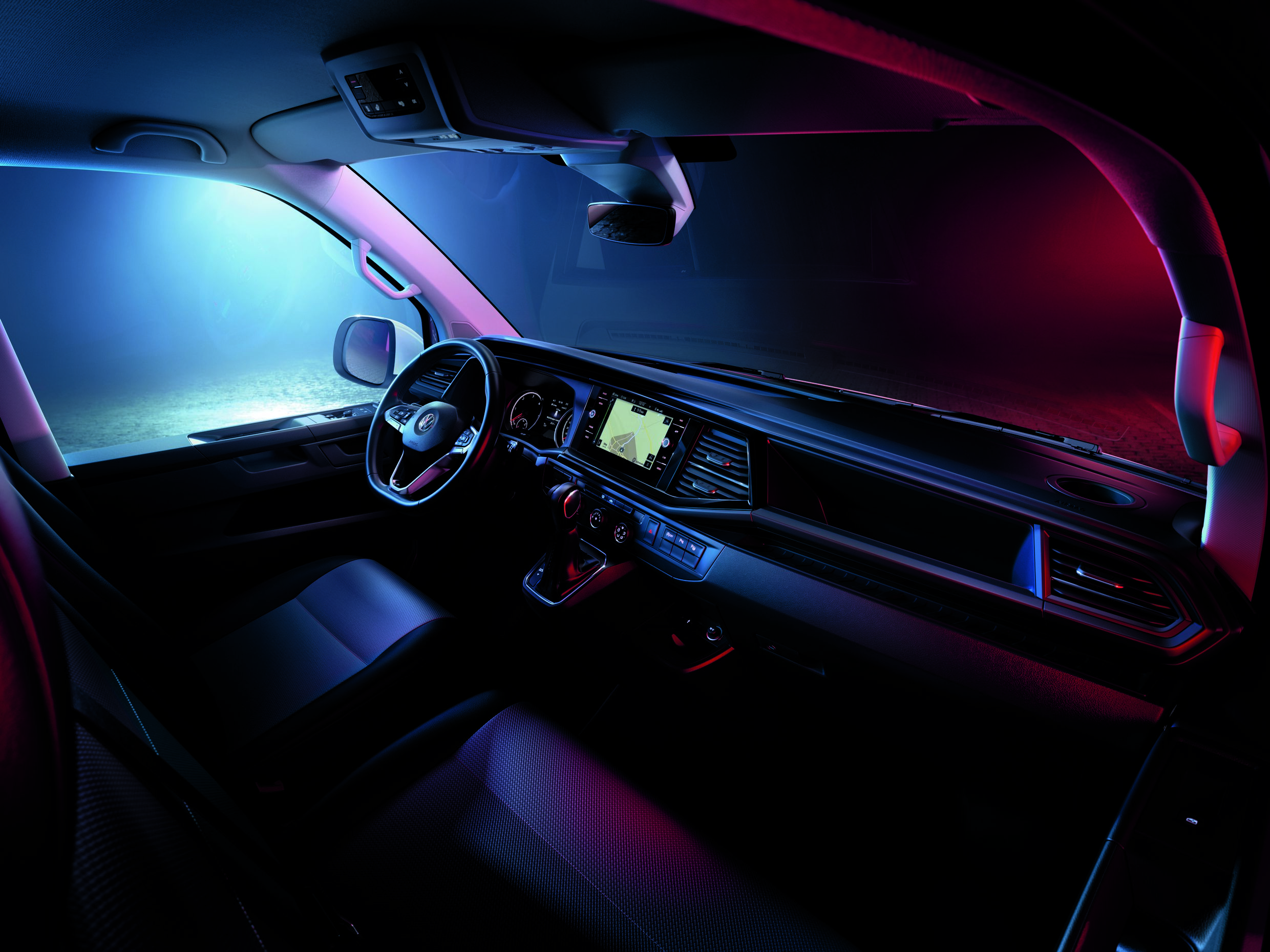 All are best-sellers. Over six generations – from the T1 to the T6 – Volkswagen Commercial Vehicles has sold nearly twelve

million units worldwide. Now the product line is getting a big update: T6.1. The latest edition of an icon. Digitalised and connected. New on-board: an array of assistance systems, digital instruments for the first time and the latest generation of Volkswagen infotainment systems with an integrated SIM card which enables continual online access. Also new: the front end design, the dash panel and an extended specification of standard features. The latest TDI engines (90 to 199 PS) deliver the propulsive power. A new powertrain version being offered in the Bulli is an all-electric drive (enables range of more than 400 km, depending on battery option). The new T6.11 will launch in first countries starting in Fall 2019. 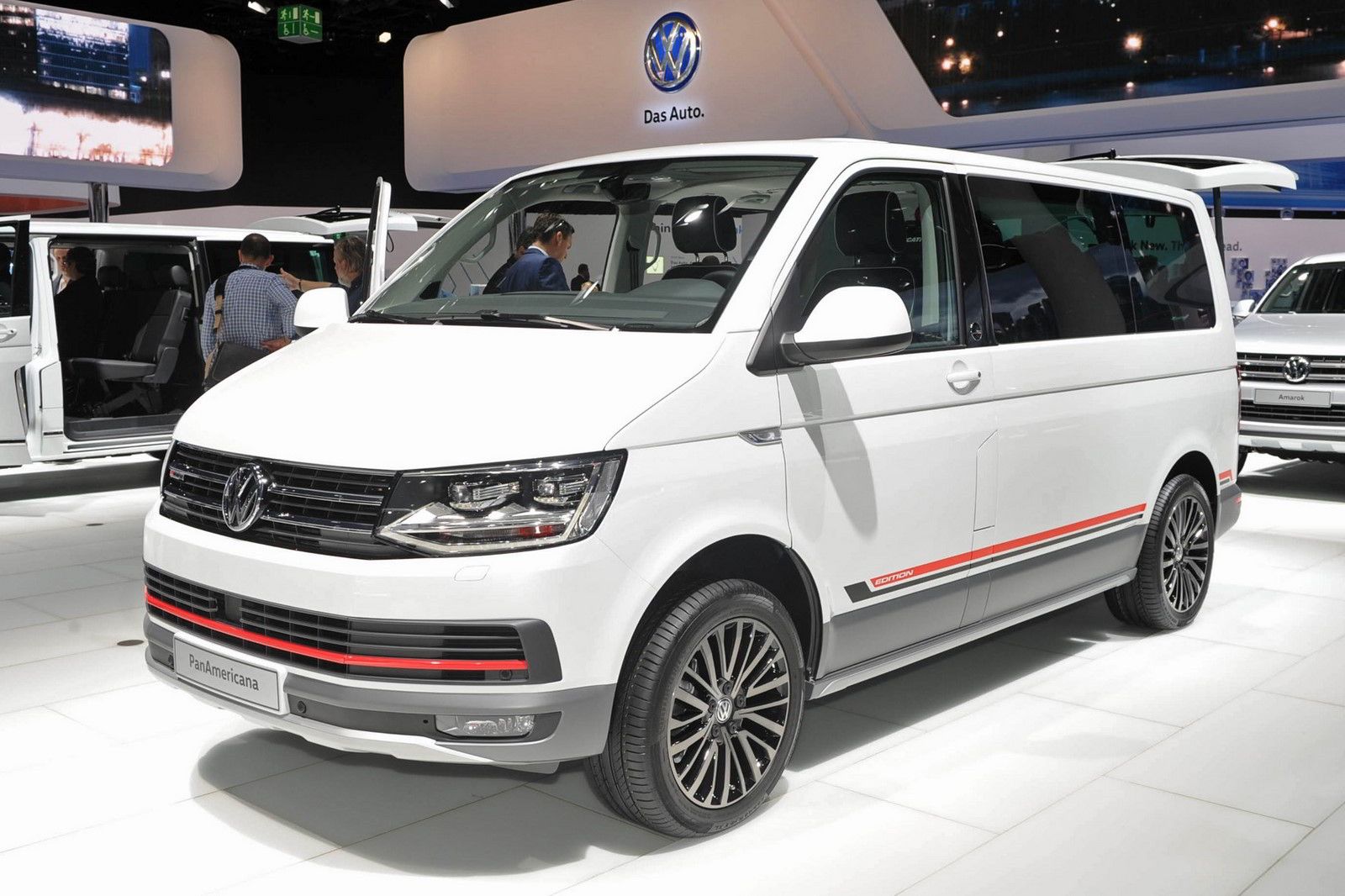 This update is no exception. In integrating a new range of assistance and infotainment systems, the development team has delved deep into the technology. Dr Thomas Sedran, Chairman of the Management Board, Volkswagen Commercial Vehicles: "The new T6.1 is the car for the here and now. We have taken a proven vehicle and updated its assistance and infotainment systems and connectivity to the state-of-the-art today."

New Cross Wind Assist included in the T6.1 as standard
"The hydraulic power steering of the T6 has given way to an electromechanical system in the T6.1 which enables active intervention into steering control. This changes everything, because it opens up access to new assistance systems", according to Alexander Hitzinger, Board Member responsible for Technical Development. Hitzinger continues: "In the T6.1 we wanted to set new standards in vehicle safety, convenience and comfort. Especially important to us was driving stability. We have made significant progress here. " The new assistance systems include Cross Wind Assist – a standard system in all T6.1 models. When there are cross winds, it automatically stabilises the Bulli in case of strong wind gusts. This makes a noticeable contribution to safety.

New assistance systems steer and brake automatically
Also on-board thanks to electromechanical power steering: the Lane Assist lane-keeping system. It detects road lane markings by camera and automatically keeps the T6.1 in its lane. From now on, Park Assist will simplify parking and reversing from parking spaces. When it is activated, the system automatically guides the vehicle in and out; all the driver needs to do is operate the accelerator and brake pedals. To ensure that everything goes right in manual manoeuvring, the side protection system from the Crafter was adapted for use in the T6.1. It utilises distributed ultrasonic sensors around the vehicle to reduce the risk of collision damage. Meanwhile, Rear Traffic Alert protects against accidents while reversing; the system warns the driver of vehicles approaching at a 90-degree angle behind the car. 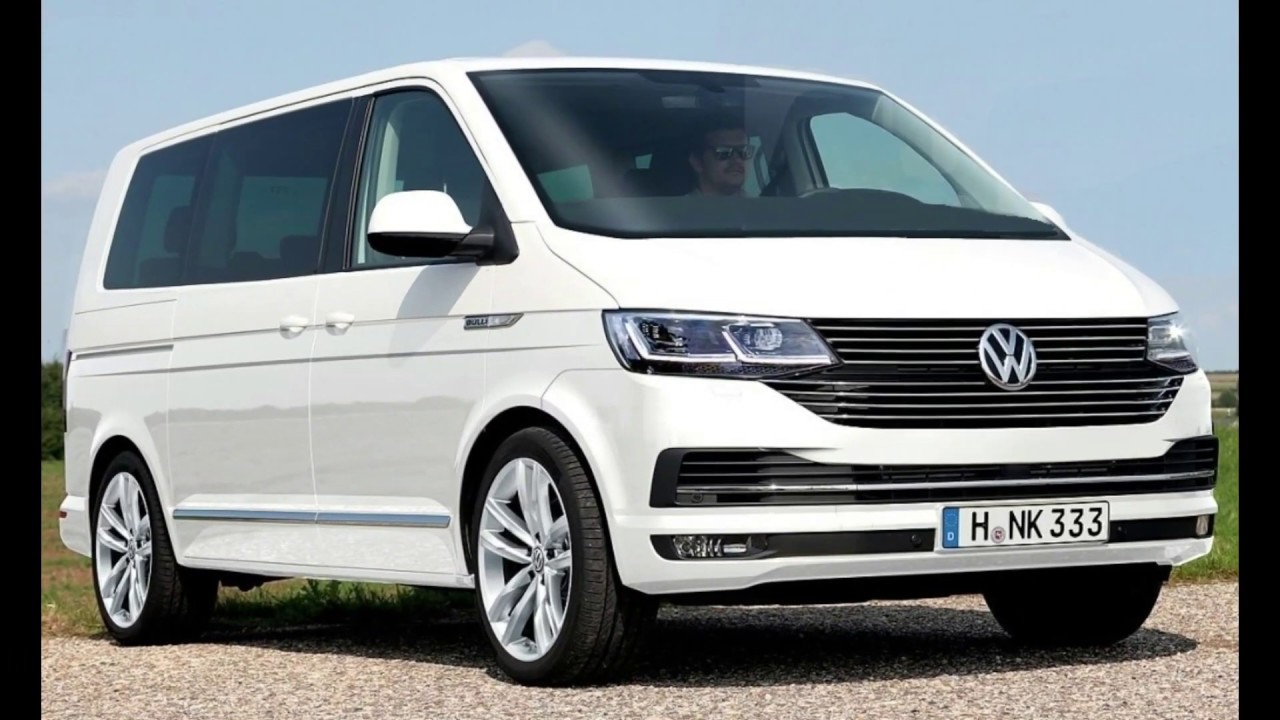 If the driver does not react, the system actively intervenes with braking.

Trailer Assist simplifies manoeuvring with a trailer
All models of the product line are ideal towing vehicles. Depending on the engine, the maximum trailer weight can range up to 2,500 kg. Now, Trailer Assist, familiar from the Crafter, makes it easier to manoeuvre with a trailer. It takes care of all the complicated rethinking when a driver manoeuvres in reverse with a trailer, i.e., having to turn the steering wheel to the left to get the trailer to turn right. The driver simply sets the desired reversing angle for the trailer using the rotary knob of the electric exterior mirror adjuster – which becomes a joystick – together with a display in the cockpit. Then the T6.1 takes over steering. Trailer Assist represents a fusion of Park Assist, electromechanical power steering and the Rear View reversing camera (which detects the articulation angle of the trailer draw bar). The range of new systems is supplemented by road sign display via the front camera. 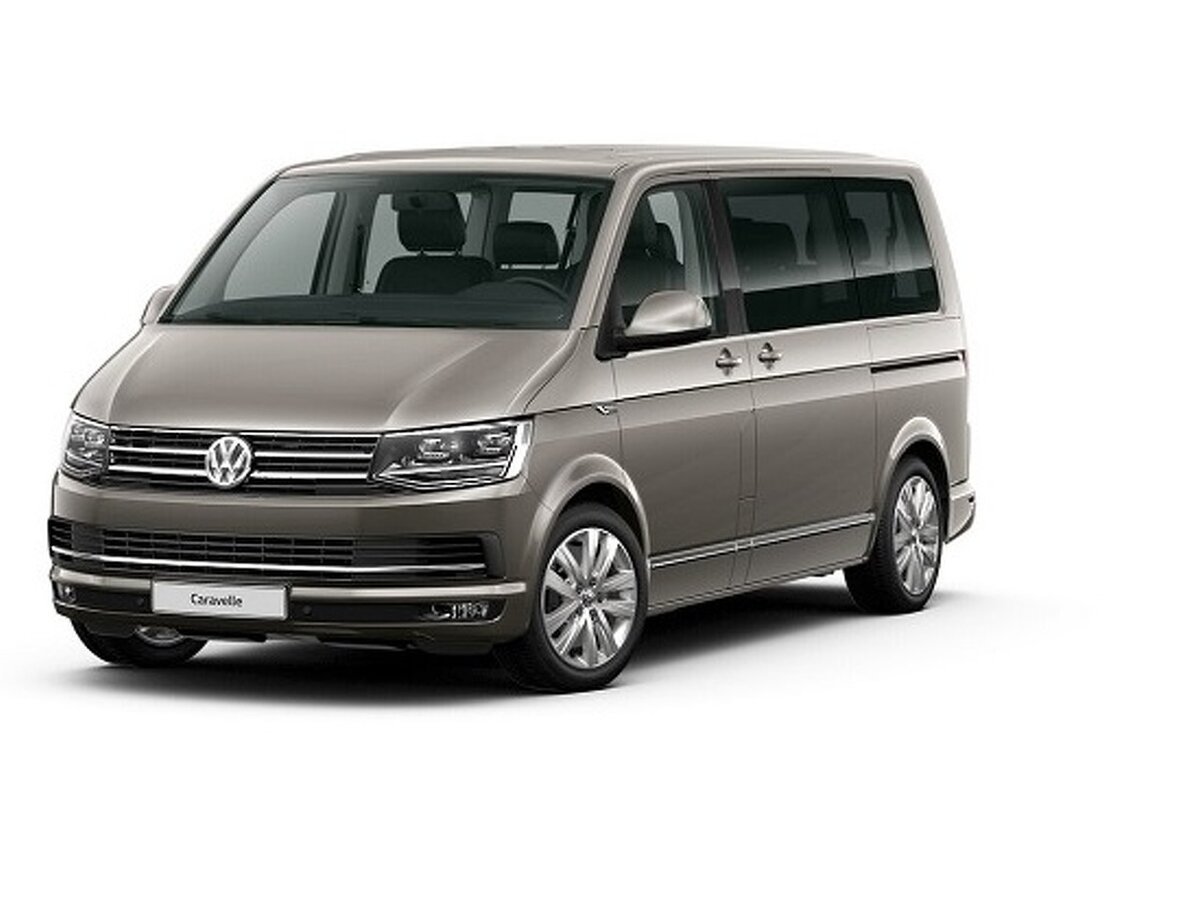 Digitalised interior features new dash panel
The dash panel of the T6.1 has been redesigned. Albert Kirzinger, Head of Design, Volkswagen Commercial Vehicles: "We have systematically tailored the driver's workplace requirements to the digital world in the vehicle." The team led by Kirzinger implemented the conditions needed to integrate the Digital Cockpit (fully digital instruments) and the third generation of the modular infotainment matrix (MIB3) in the T6.1. The fusion of the Digital Cockpit and the MIB3 creates a new digital landscape of displays and controls that is aligned along one visual axis.

Digital Cockpit has a 10.25-inch display
The 10.25-inch Digital Cockpit of the T6.1 sets new standards. It is included as standard in the Multivan Highline. The display’s high-contrast graphics have been designed for clarity and sophistication. The driver can choose between different screen configurations. They are switched by pressing the View button on the multifunction steering wheel. 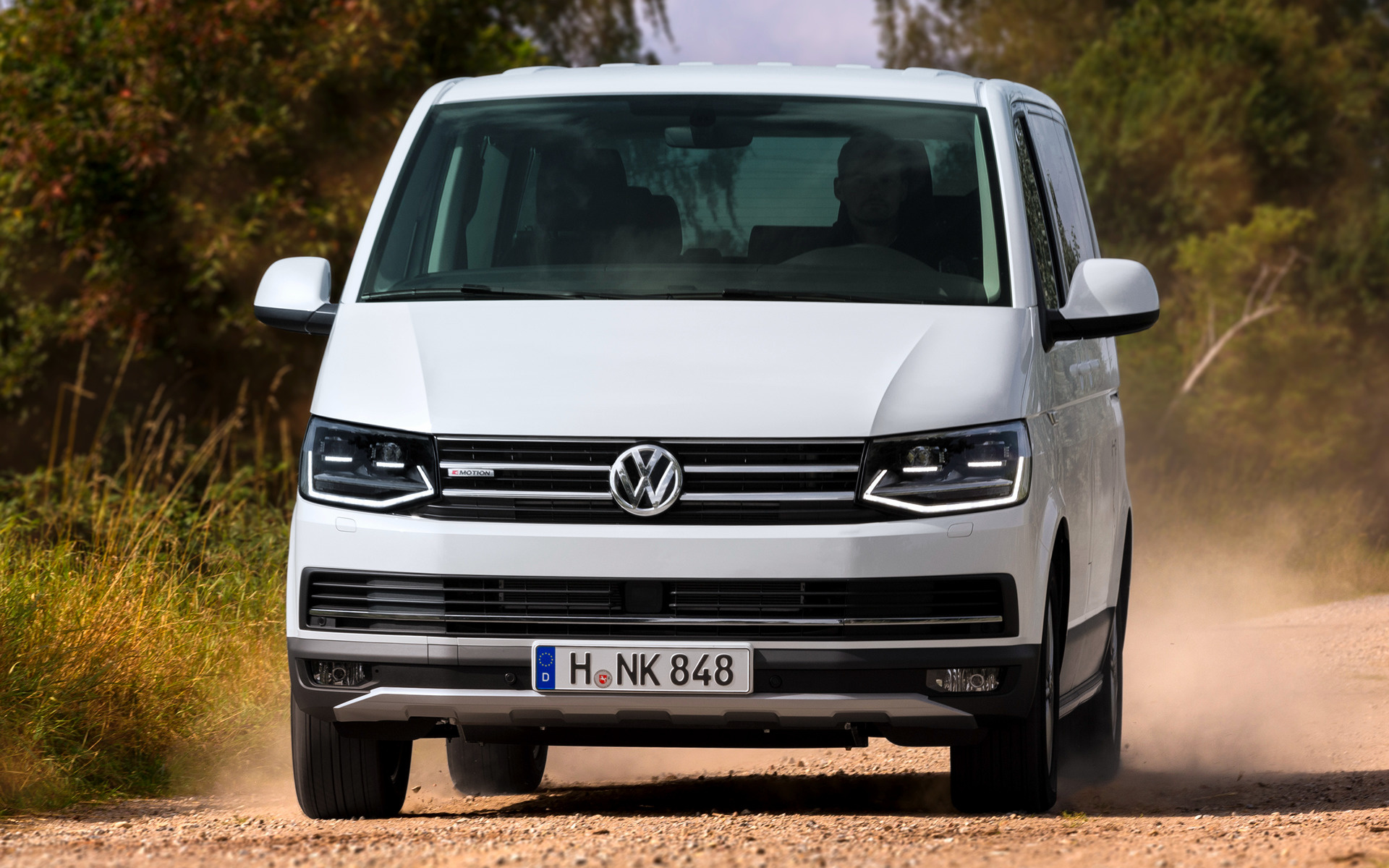 Configuration 1: a rev counter and speedometer are displayed interactively in the round instruments. An individually selectable content level is shown in the middle of the screen – such as the phone book of the smartphone. With the top infotainment system, the navigation map can also be opened in the middle between the two instrument dials. Configuration 2: available here is a digital view without dials that offers various information fields. Also integrated centrally here is a user-selectable display – e.g. the media library. The conventional analogue instruments were also redesigned; they feature a multifunction display located in the middle.

MIB3 offers displays up to 9.2 inches in size
Another highlight in the T6.1 are the new navigation systems of the MIB3: the Discover Media (8.0-inch) and the Discover Pro (9.2-inch). The graphic layouts of these touchscreen systems have been redesigned. Functions can be individually configured, like the apps on a smartphone, from a home screen that can be personalised.

The display of the Discover Pro also features a full glass overlay. The infotainment programme is rounded out by MIB2 systems: the Composition Audio (with line display, standard from base model) and the Composition Colour (6.5-inch touchscreen, standard from Caravelle Highline, Multivan Comfortline and California Coast).

Infotainment systems with integrated SIM card
The most important new equipment feature of all infotainment systems is an integrated SIM card (eSIM). It is included as standard from the Composition Colour and is available as an option for the Composition Audio. The eSIM opens up a new range of online-based functions and services. An example is the eCall function. When an accident occurs, this system automatically sends the vehicle’s location to an emergency response centre and establishes a voice connection. If no response is received from the car, emergency services are informed. In addition, the eSIM represents the interface to "Volkswagen We" – a new world of online services. 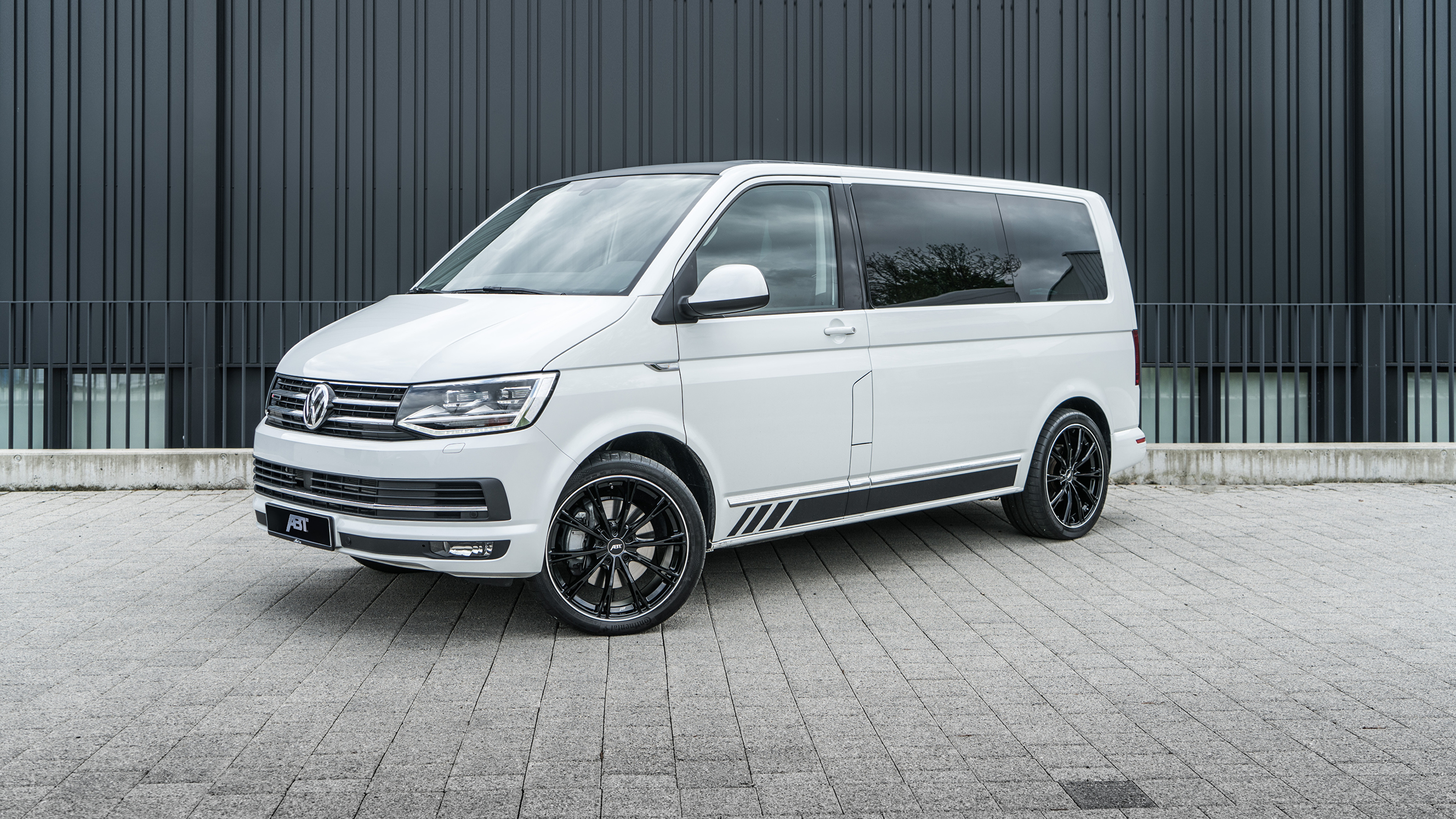 The 8.0-inch and 9.2-inch systems of the MIB3 also offer features such as internet radio and music streaming services.

Natural language control simplifies operation
Thanks to the eSIM, user control is even more intuitive and thereby easier. That is because the new 8-inch and 9.2-inch infotainment systems in the T6.1 can now react to natural language commands. The voice input is compared to an online database and is automatically translated into digital commands. As with other smart devices, all it takes to get the T6.1 to listen is a brief wakeup command. In this case: "Hey Bulli". Then the conversation might continue like this: "I would like to go to the Gendarmenmarkt in Berlin." And the navigation system quickly suggests the precise address as a new destination.

Apple CarPlay™ now operates wirelessly too
Another important interface is being perfected by MIB3: App Connect. Using this function, smartphone apps like Google Maps, the Media Library or Spotify can be used directly via the infotainment system’s display.

Until now, a cable connection was needed between the smartphone and the vehicle. For iPhone users, this cable is now "history" in conjunction with the 8.0-inch and 9.2-inch systems. Once an iPhone has been coupled, it will automatically connect with the infotainment system via Bluetooth and the wireless Apple CarPlay

™. Compatible smartphones of all brands can now also be charged wirelessly – via an inductive charging station in the new dash panel.

New detailed solutions make the work day perfect
Volkswagen Commercial Vehicles has developed completely new features specially tailored for everyday work. They include a 230-volt electric socket at the driver's seat and a lockable compartment in the double bench seat on the passenger side. In addition, a loading option was newly designed for especially long cargo items; it can now be pushed under the double bench seat on the passenger side (under-seat loading function). This increases the maximum cargo compartment length from 2,450 mm to 2,800 mm or from 2,900 mm to 3,300 mm (extended wheelbase). 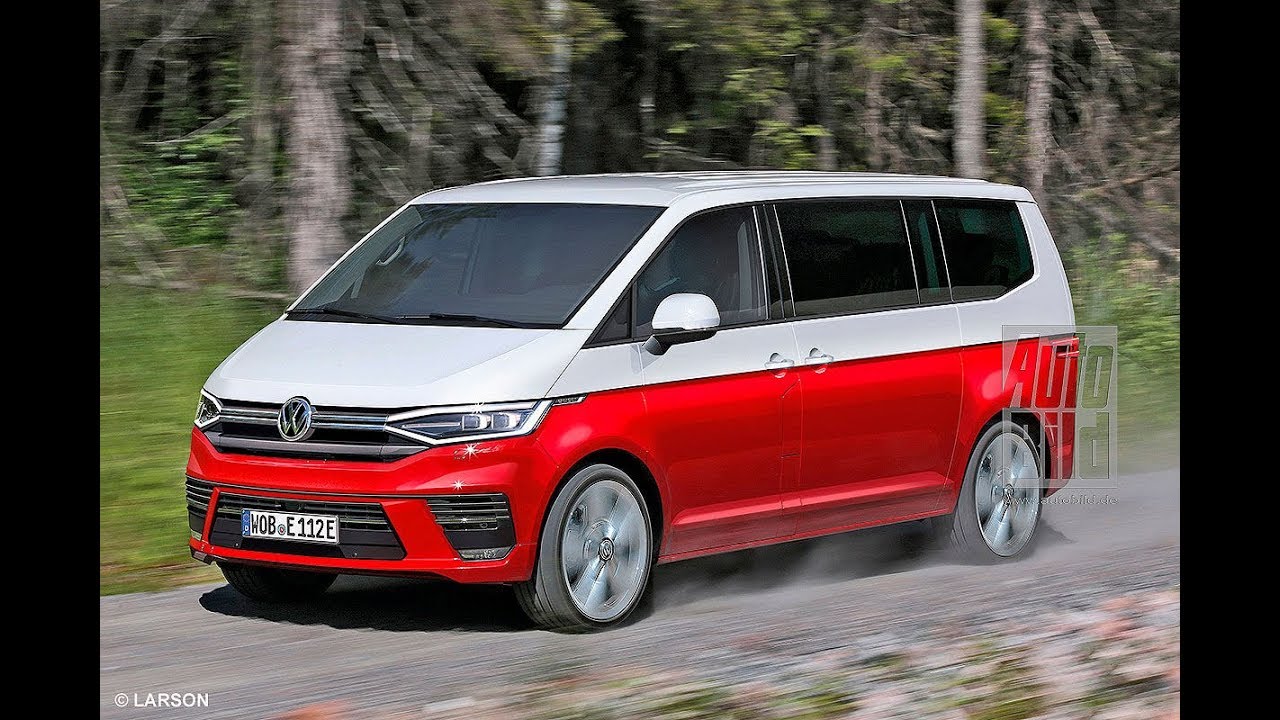 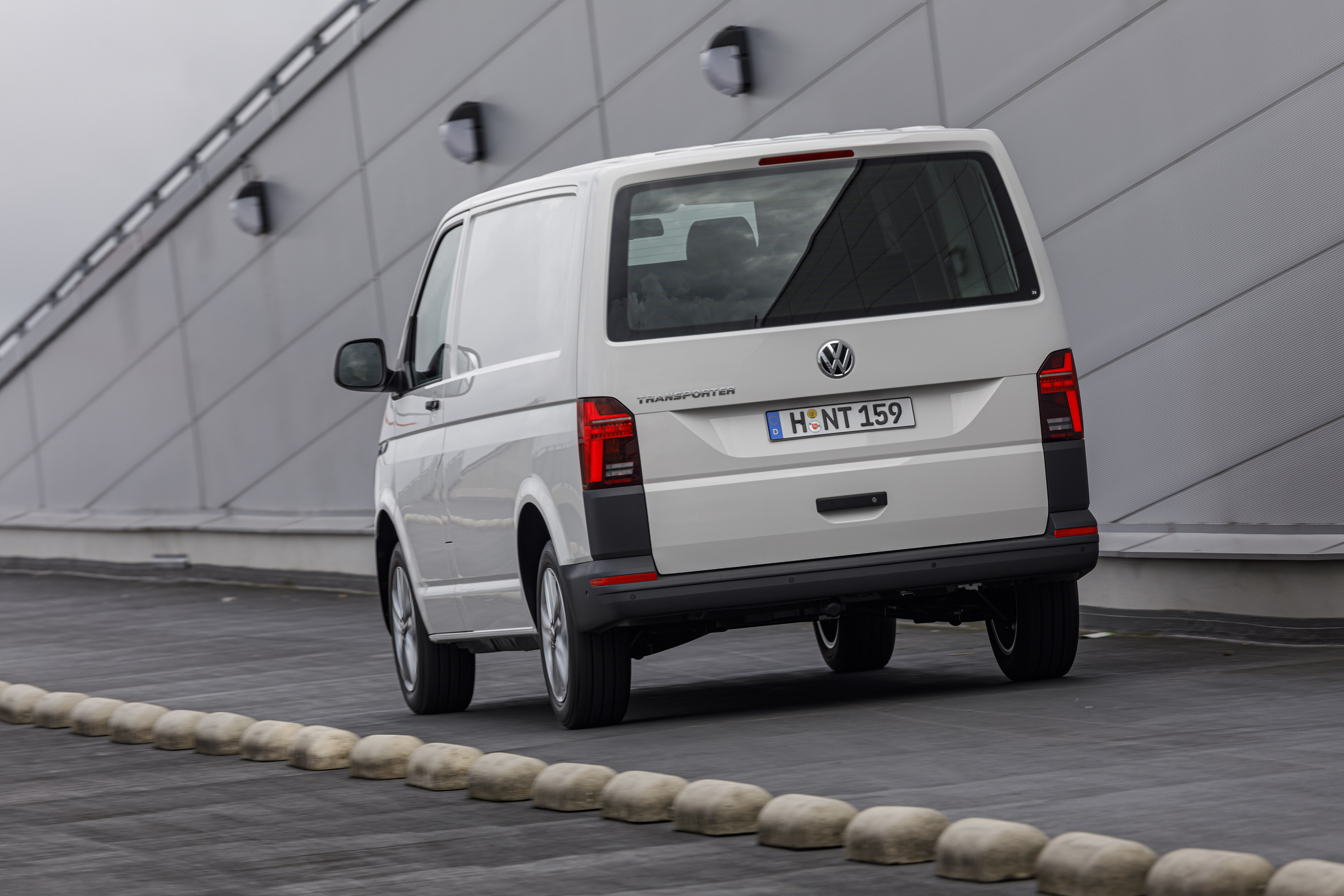 Added features for the Multivan 6.1
Volkswagen Commercial Vehicles has also extended the standard features of the Multivan 6.1 appreciably. Compared to the previous model, the Multivan 6.1 Trendline, for example, has a new upgraded dash panel, the Composition Colour audio system with a 6.5-inch touchscreen, electric actuation of child protection for the doors, new H7 headlights and a new leather-trimmed multifunction steering wheel. The Multivan 6.1 Comfortline also gets such features as the Premium Multifunction Display, decorative trim on the dash panel and in the door trim panels, the Light & Vision package and additional USB ports in the passenger compartment. Extra features of the Multivan 6.1 Highline include new LED headlights, the also new LED tail light clusters, Park Assist (including the Park Pilot, front and rear, and manoeuvring brake function), the 8-inch Discover Media navigation system and the Digital Cockpit. The new standard features of the Caravelle and the California will be announced later. 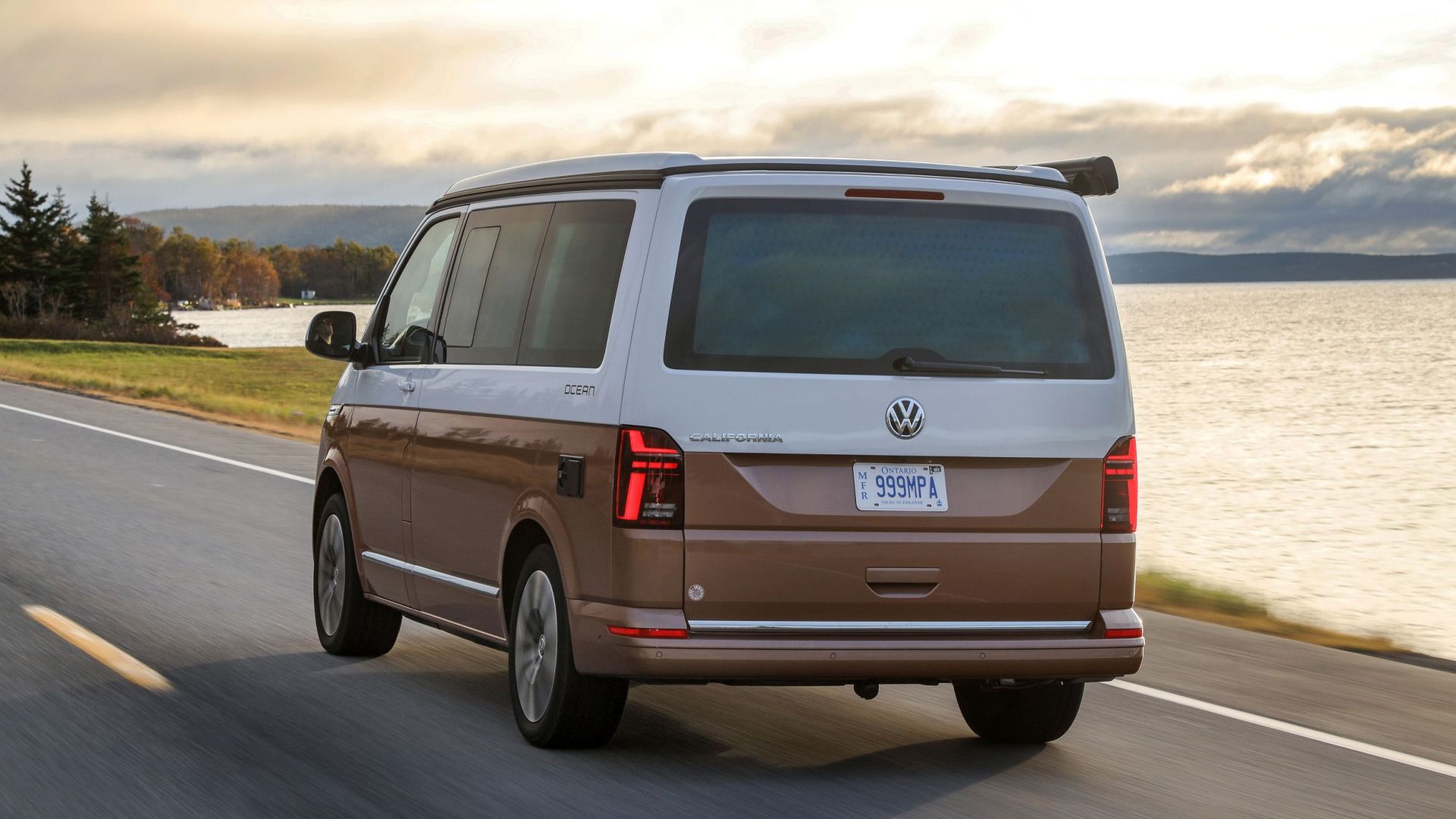 New front-end design of the product line
If there is a commercial vehicle in the world whose design can be considered "perfect" just as it is, then it is the T6. Even more: for many fans of the versatile vehicle, the design has long acquired a huge fan base. The team led by the Head of Design, Albert Kirzinger, has therefore intentionally sharpened just the front end. Kirzinger: "The T6.1 has even greater presence on the road. We now have a very large air intake – which is something we really need technically with today’s engines. At the same time, we were able to emphasise the vehicle's width and develop an even sharper look." The crossbar formed by the more compact design of the headlights and the upper part of the radiator grille is narrower than in the previous model. "In this area, we have designed a new double chrome bar which extends across the entire width and into the headlights as LED strips for the daytime running lights. The car expresses a very special charisma and can be recognised as a T6. 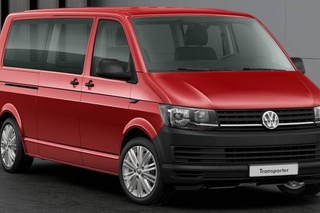 1 from a long distance." The front end may also be personalised with more chrome details depending on the model and equipment. The ranges of colours and wheels have also been remixed. 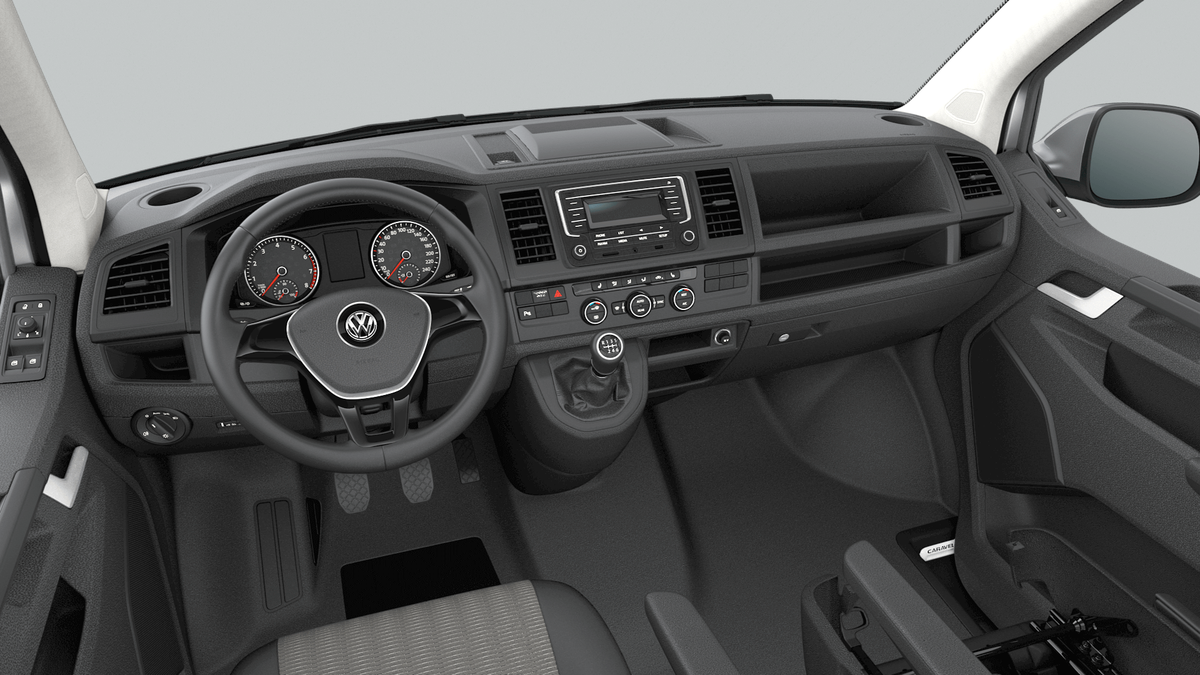 The 199-PS top version is equipped with DSG as standard (optionally with 4MOTION).

Finally, the T6.1 will even be offered as a zero-emission vehicle based on a partnership with ABT. With an output of 82 kW / 112 PS and a battery capacity of either 38.8 kWh or 77.6 kWh, driving ranges of more than 400 km (NEDC) will be possible – making the vehicle ideal for commercial duty in the urban world.

1) This vehicle has not yet gone on sale 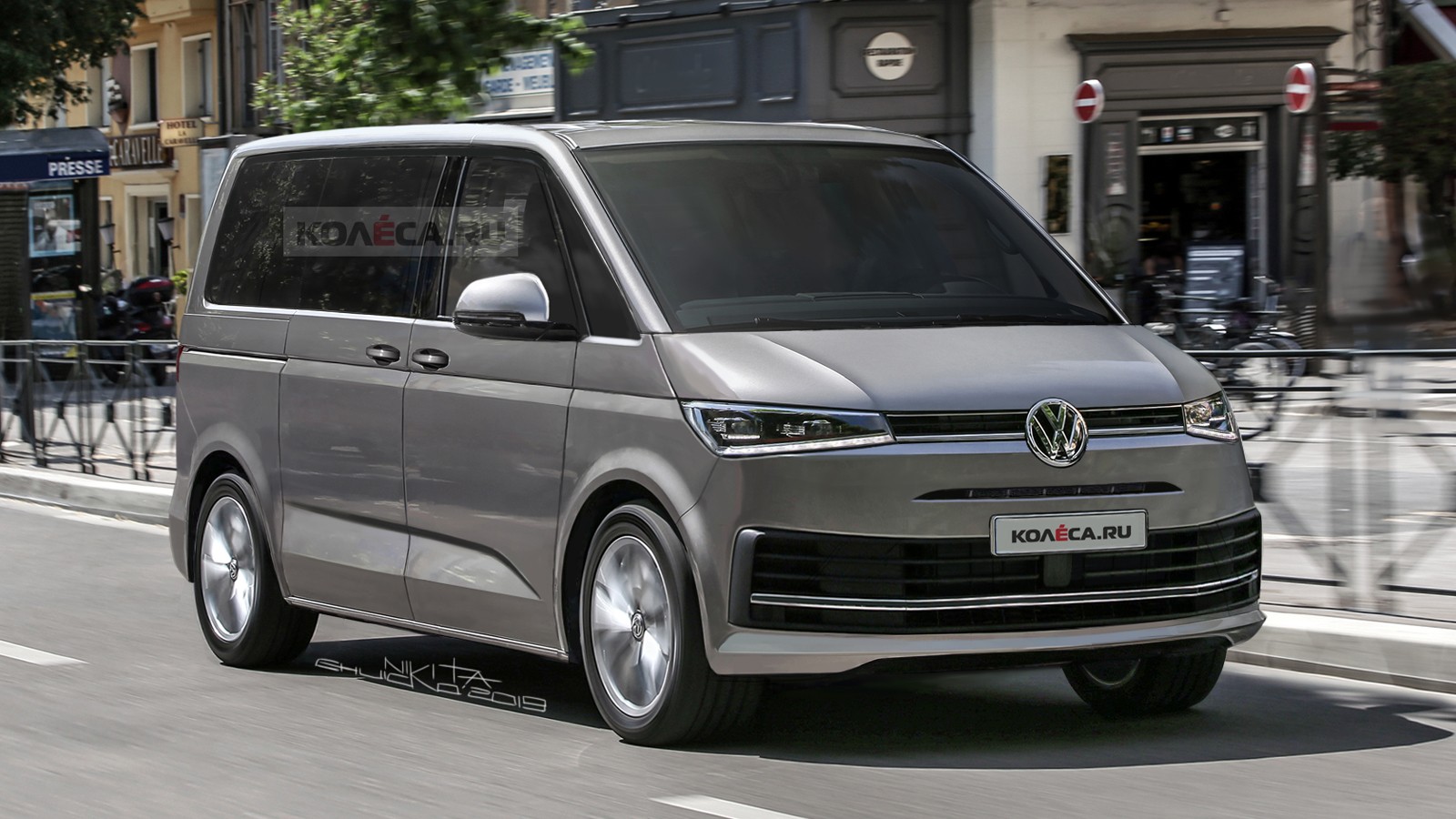 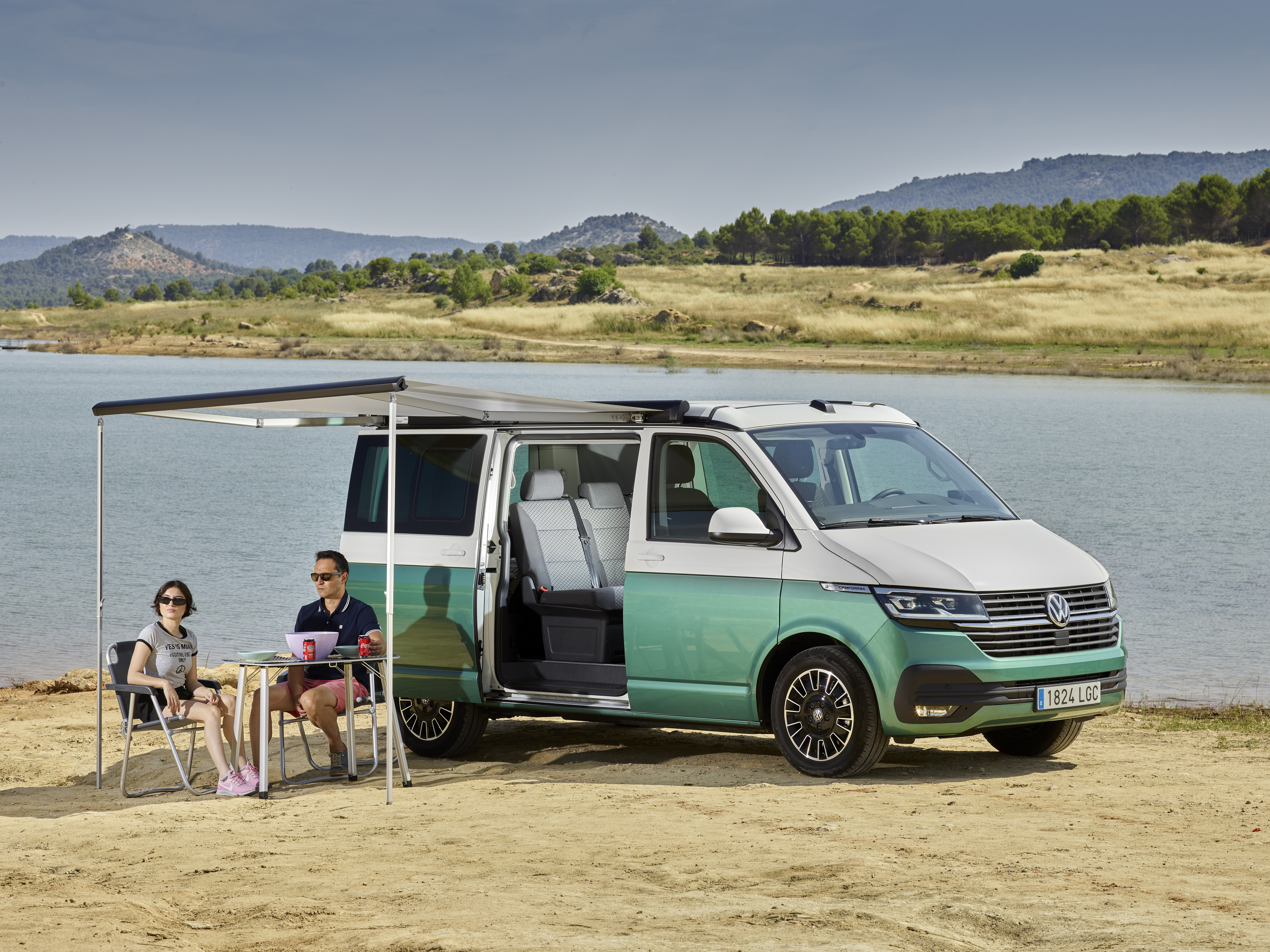 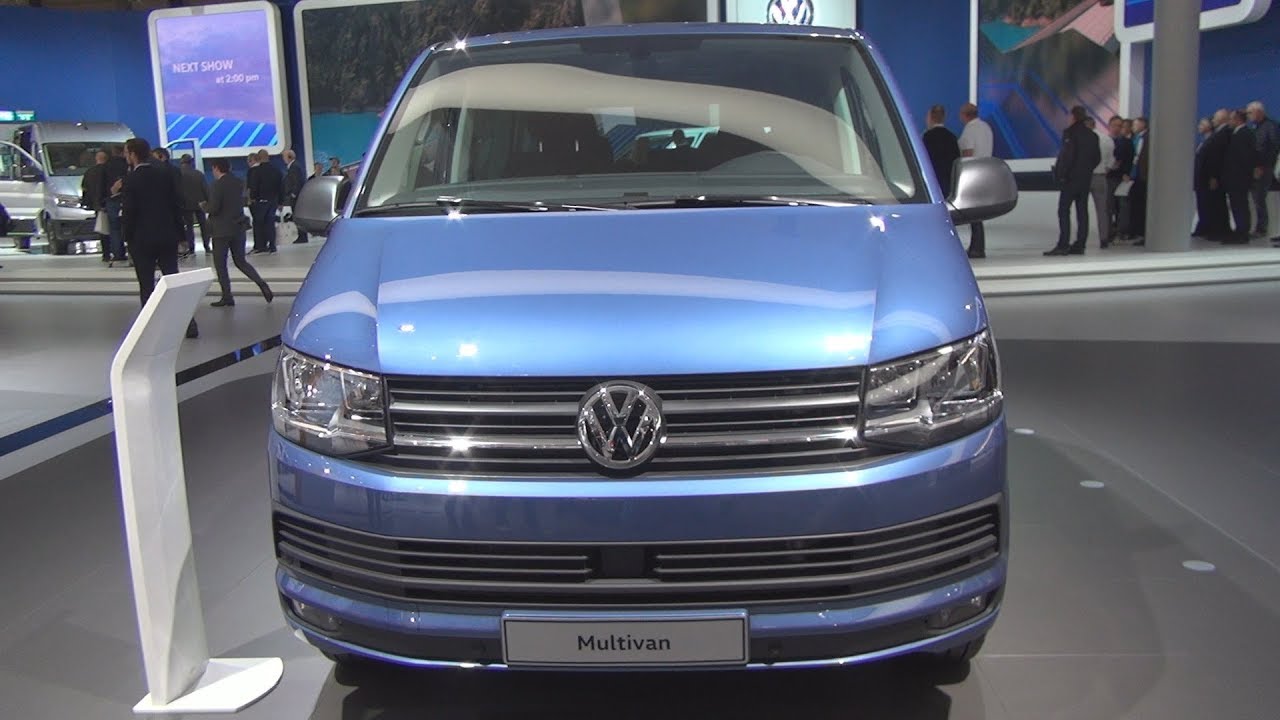